Liz Della Croce has been living online for five years, posting neatly curated photographs of vegan smoothies and shrimp ceviche, along with recipes and heartwarming messages.

In the Wild West world of “influencer” marketing, five years makes Ms. Della Croce a veteran. The Michigan star, who is 38 and takes inspiration from losing 55 pounds in 2013, is known for her blog and social media presence as The Lemon Bowl. Every week, she responds to around two dozen requests from brands to feature their products and services in her personal social media feeds — paying her a fee to do so.

Until recently, influencers like her were overwhelmed by a cottage industry of publicists and consultants working to connect them with ambitious brands. Now, the world’s biggest advertising agencies are stepping up to do some of that taking over.

And not a moment too soon, some say. While Ms. Della Croce considers herself a professional, budding new influencers, lured by a flood of dollars into the space, are damaging the reputation of the influencer marketing industry, she says.

“A lot of influencers have never had a day job or had to sign a contract . . . They may not take it seriously,” Ms. Della Croce said.

Despite concerns about brand safety and fraud, major agencies such as WPP, Publicis and Omnicom are increasing their investments in the burgeoning space, building platforms that use artificial intelligence to match creators with content with brands and offering services to help deliver campaigns.

The rise of influencer marketing, fueled in part by the growth of Instagram, the most popular platform for influencers, comes as Millennials and even younger “Gen Z” consumers shun traditional media for homemade content from online stars. The result is advertisers foregoing spaces such as print and television and placing campaigns in the less familiar hands of social media celebrities.

But change is already proving difficult for large agencies, which must navigate a world of zero standardization, fraudulent follower metrics and misbehaving stars.

“Over the past 12 months, we’ve been able to see this take off,” said Chris Inners, senior director of multimedia agency Omnicom OMD, which 18 months ago launched an AI-based tool used to match brands to influencers.

“[But] you still have some of the inherent risks when working with an off-brand third party,” he added.

TikTok, Snapchat and Facebook-owned Instagram are among the social media platforms that have attracted growing armies of “influencers” with large followings, who are often paid or “sponsored” by brands to promote products, usually fashion and beauty items.

According to data from the Influencer Marketing Hub, global influencer marketing spending this year is expected to be $6.5 billion, up from $1.7 billion in 2016. At the same time, the number of new platforms and agencies on the market almost doubled, from 335 in 2016 to 740 at the end of 2018.

Typically, social media apps host traditional paid ads in their feeds, which are clearly differentiated from user posts. But for brands, the appeal of using influencers to market products is that they can post low-cost content that’s technically advertising – but looks and feels a lot more “authentic.” ” at a time when ad blocking is becoming more commonplace.

For content creators, influencer marketing can be lucrative – and promises to be more so in the future. Instagram has begun rolling out a long-term strategy to allow influencers to sell products directly on the platform for the first time, rather than just directing users to a website.

To date, the influencer brand-matching industry has been dominated by several fast-growing start-ups – including Whalar, Clever and theAmplify – as well as a long tail of small outfits.

But, spy opportunity, ad agencies are now rushing into the business, promising to help clients navigate a fragmented space teeming with mega-celebrities such as Kim Kardashian and her half-sister Kylie Jenner and so-called saying micro-influencers with between 10,000 followers. and 50,000 people.

Since its debut 18 months ago, WPP-owned GroupM has developed INCA, a platform that uses AI technology to match brands and influencers and then gauge campaign performance.

According to Dafydd Woodward, global head of CNIB, the number of clients and campaigns has increased by at least 50% year over year.

Rivals say agencies may be cannibalizing their own business, given that influencer marketing campaigns can be delivered for far less than traditional advertising campaigns.

“CEOs come to people like us for information,” said Neil Waller, chief executive and co-founder of Whalar. “But it’s also such a cost saving [for the client . . . An agency] can charge $250,000 for something that was once worth $1 million. What does this mean for [the agencies’] billing?”

But the agencies say client demand is high and they are best placed to solve some of the challenges – both reputational and technological – currently plaguing the space.

The first is a lack of standardization around prices; fees charged by influencers for posts can range from $100 to tens of thousands of dollars, for example.

“Clients are rightly concerned that they often feel like there are very random pricing and spikes in inflation that aren’t justified,” Publicis’ Mr. Waugh said. “Agencies can force price normalization.”

There is also little standardization around performance measurement metrics – namely ROI, which requires the influencer themselves to hand over the keys to their accounts to enable insights to be extracted from their data; again, ad agencies claim they have the deep pockets and experience to create standards and push the industry to mature.

More pressing, however, so-called influencer fraud continues to be prevalent. Fake followers can be bought online via clandestine outfits, while there is a trend where private groups of Instagrammers, known as ‘engagement pods’, comment on others’ posts to boost engagement .

According to the Influencer Marketing Council, a trade group, on average more than 11% of engagement for influencer-sponsored posts on Instagram are generated by fraudulent accounts.

Agencies say they respond by creating systems to check and verify if an influencer has what they seem to have. “We use technologies to try to understand and track large spikes in following and engagement,” Woodward said, adding that an unexplained spike would indicate bought engagement. 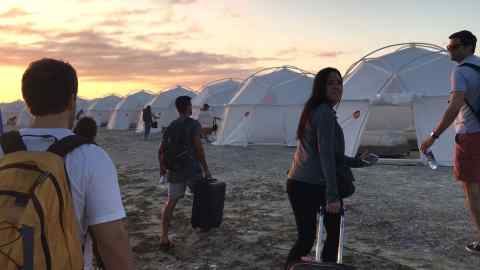 It also highlights the risk that influencers themselves simply won’t fulfill their contracts or create content as compelling as is expected of them. “It’s something we’ve seen. You buy a relationship,” he said. “[Influencers] need to understand what the brand is and what they are trying to accomplish. »

Regulators also circle the space. The US Federal Trade Commission and the UK’s Competition and Markets Authority have issued guidelines urging influencers to more prominently disclose their relationships with brands. Research by the Influencer Marketing Hub of 100 fashion micro-influencers towards the end of 2018 found that only 11% of their posts complied with the rules.

Customers warn that there is still a long way to go.

Luis Di Como, vice president of global media at major advertiser Unilever, said while influencer marketing is an “important part of all of our communications plans”, the technology to track fraud is still nascent and Instagram is still nascent. -even must open. its systems so that third parties can see the relevant data.

“We need influencer accountability. . . visibility of metrics,” he said. “We need more third-party verification and the ability to conduct research.”