Combining RoboDK’s programming software with an industrial robot, the system is more affordable than existing solutions for robotic filmmaking.

With a high-speed camera attached to the end of a robot, shots are faster and much more accurate than with a human cameraman.

These systems allow filmmakers to create more engaging food and drink videos. However, the high cost of robotic systems can be constraining, especially for companies based in countries with low GDP.

EngamaDos, a creative advertising agency in Chile, has built a robotic system that is cheaper and more accessible than most commercial systems.

Creative consultant Xavier Sanchez says, “There is a lot of demand for these types of shots. I shoot with the robot about 4 times a month. We use them for food, beer and beverage companies. Our customers include Nestlé, Coca Cola and Nacional Beers.

How robots took over high-speed videography

Slow motion is common in video advertising. Tantalizing images of fresh pizza dough spinning through the air, close-ups of water droplets running down a cold bottle or sizzling steaks on a grill excite our senses and make us appreciate the products.

This type of shooting involves complex series of coordinated movements that are not easy to pull off. A chef performs a quick movement like cutting an onion in half or sharpening a knife. These movements are often too fast for even the human eye to see clearly.

The conventional way to create such shots is for a human operator to move the camera by hand. However, this is very inaccurate and the camera cannot be moved quickly.

Over the past 5 years, many videographers have started using industrial robotic systems to coordinate such complex movements. A high-speed camera is attached to an industrial robot arm. An electronic control system synchronizes camera movements with lighting and other motors.

In the blink of an eye, the robotic system moves the camera with absolute precision and repeatability. This allows filmmakers to focus on perfecting the more organic aspects of the setup, such as the movement of the food, the flames from the cooking medium, or the steam coming from the food. 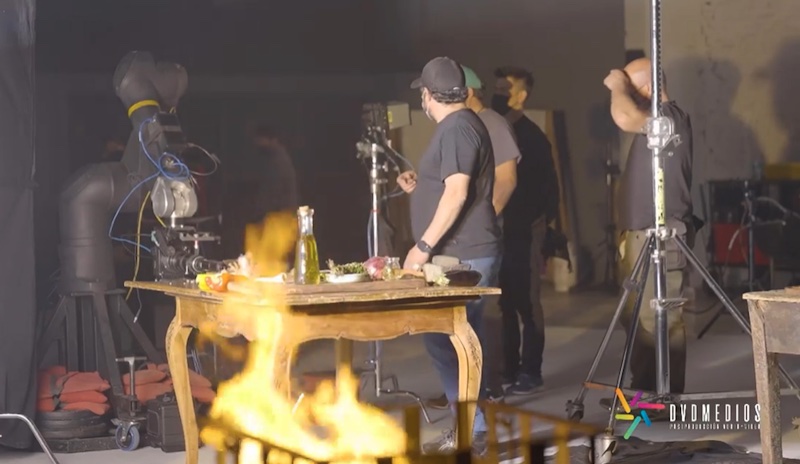 The problem of high-cost robotic cinema

Until now, most existing commercial systems for robotic filmmaking have been inaccessible to all major companies.

Sanchez explains: “We saw a similar system for the first time in 2016. But the price was very high. For me to be able to deploy such a system in a low GDP country like Chile, it had to be affordable enough that people could rent it.

The EngamaDos team decided to explore how they could achieve the same level of high precision with a robotic system they had built themselves. This would open the technique of robotic videography to many other companies.

How the system works

The system is based on a Stäubli TX90XL industrial robot, a Raspberry Pi embedded development board and RoboDK robot programming software.

Sanchez explains how all of these components fit together: “With the Raspberry Pi, we were controlling triggers, lights, and external motors.

“This avoids damage to the system or the environment and synchronizes all effects. RoboDK is easy and intuitive to use with good support. It’s a really friendly development environment.

Using RoboDK, the team system is easy and quick to program. This allows them to update precise camera movements on the fly while filming. 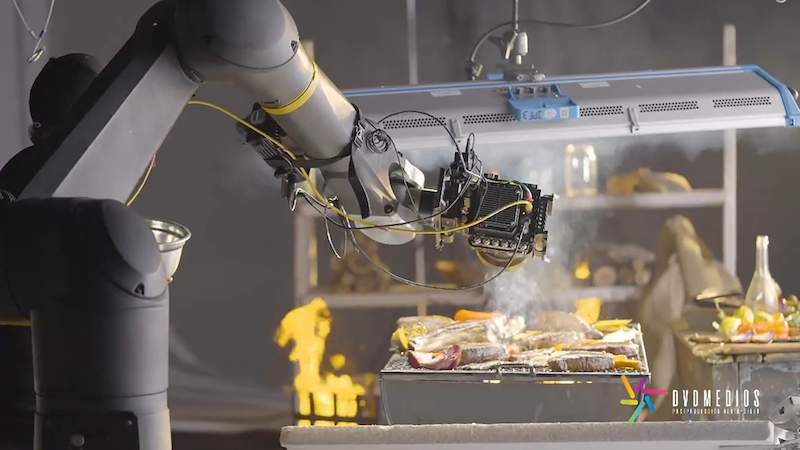 What’s next for robot cinema at EngamaDos

EngamaDos has seen great adoption of the robotic system by its customers. A recent project for Chilean company Melt Pizzas, for example, featured some very dynamic replays and helped brand the company as a disruptive and challenging pizza brand.

They now plan to increase the speed of the robotic system.

Sanchez says, “Next, we plan to add a 7th axis to the system to move the robot faster. This is difficult to achieve because the robot weighs 200 kg and we need it to move at 6 meters per second with full precision.

This upgrade will allow for even more impressive slow motion shots and the additional axis will be easy to integrate with RoboDK.